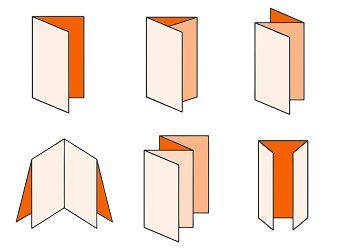 Scoring refers to the process of creasing a sheet of paper so it will fold easier and without cracking with a "blunt" knife. Paper of 170gsm or more as well as digitally printed paper are scored before folding to ensure it does not crack along the fold. Thinner paper can be folded only without creasing provided the fold runs along the grain of the paper.